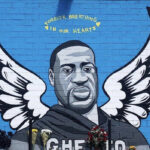 Alex Roman Jr. (“Donkeeboy”), a visual artist based in Houston, is a remixer of pop culture. He puts his own unique spin on famous icons, creating works of art that consist of double entendre and visual puns, including signature pieces such as “PAC-asso”, “Wonder Frida” and “DJ Screw” made with 4,379 screws.

A Houston native, Donkeeboy moved to Mexico as a young child. Influenced by his mother, Donkeemom, it was there that he discovered his passion for art.

“I was always around art because of my mom,” he says. “There was a pretty big competition in Mexico; I drew something when I was six years old and I won it. Ever since then, that was it.”

Alex returned to Houston at the age of seven and would go on to graduate from Milby High School. He adopted the moniker “Donkeeboy” as a retort to the naysayers who told him he couldn’t make it as an artist.

“Growing up, people would call me ‘Burro’, which means ‘donkey’ in Spanish,” he says. “I took a negative, and I flipped it. Donkeys are looked at as dumb animals, but if you research them, you will find that they are noble, hardworking and loyal once they trust you. Those are the attributes that I want people to remember me for.”

In recent years, Donkeeboy has become one of Houston’s most prominent artists. His murals can be found at iconic Houston restaurants including Shipley Do-Nuts, Burns Original BBQ, Riel and The Original Ninfa’s. He is the resident artist at 8th Wonder Brewery, where he hosts free art shows five times per year highlighting other local artists.

Houston sports fans will recognize Donkeeboy’s work from the murals he painted in center field at Minute Maid Park for the 2018-19 seasons. Donkeeboy also has collaborated with Fender and Louisville Slugger for the 2019 MLB All-Star Game; Champs Sports and Complex Magazine at Art Basel 2018 in Miami; Mitchell & Ness; Porsche; the East End Street Fest; and Memorial City Art Fest.