In 2018, we have an impressive series of first’s: First Mural in Houston to showcase the history of Independence Heights (first city incorporated by African Americans in Texas) First Mural in Houston, Texas created and led by a Moorish American on this grand scale First Mural to have fused augmented reality with fine art The Mural was painted on the First Whole Foods 365 in Houston, Texas and 2nd in the State of Texas. Our work has been featured in several publications: Houston Chronicle The Leader News Houston Business Journal Other Notes: Artist’s were as follows: Lead Artist Danny Asberry El, Craig Carter, Zink, Jeff and Joshua. We are happy to also say thanks #IndependenceHeights #WholeFoods365 #Jerry’sArtarama #PictureWorthcustomframing #Homedepot #Lowes #uncovereverything app for supplies and other essentials for this project.

Location of this work 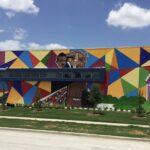 @solelint
More about the artist

Send us your corrections and additions

We welcome submissions of new murals, and additional information or corrections about the street art installations that appear on the map. This site is an evolving work in progress.

Please use this form for all submissions and corrections or additions. If you are adding a mural, at a minimum, we need the location, and a high-resolution photo released for use on this website. Thank you!

Murals in this community