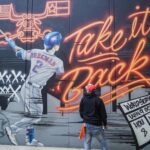 Erik ‘Coler’ Del Rio was born on June 24th,1978 in Houston.  He began developing an interest in art at the tender age of 5, while drawing and painting in his elementary school classes. Coler’s artistic endeavors, however, soon began to focus more on graffiti after spying pieces in his skate magazines. He first tried his hand at graffiti when he was just twelve years old, and realized he had found his passion.  After 24 years of painting, he is still considered to be one of the originators and innovators in Houston’s graffiti scene.  Coler is one of the most well-known, and respected writers you’ll find. His 20 years of tattooing have also helped hone his artistic skill. Graffiti and tattooing have worked harmoniously for Coler to help create a style that is untouched by others and unmistakably his own.